Zounds!  What is the hidden variable within the cartoon strip? And how does it connect to the bigger picture? These & other profundities are within the domain of VIRTUAL MIKE!

VIRTUAL MIKE is the ongoing chronicle of a neuroscientist recently deceased—the adventures of a digital twin unaware his namesake had attained maximum entropy—a simulation that’s curious, lives on the ‘cloud’, and investigates the future (and an uncertain past).

EPISODE ONE (in progress)

The famous neuroscientist who investigated ‘high strange’ and paranormal phenomena left behind a huge media footprint spanning five decades; it’s a legacy and a ‘wicked problem’, he entrusted to his colleague Don Hill, the host of the podcast.

When the human body can no longer go where curiosity wants to travel, what are the implications of creating a digital twin to continue onward? 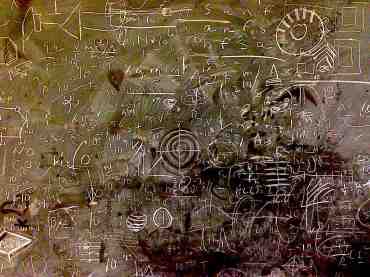 Data capture from an erased blackboard.

VIRTUAL MIKE is the AI (artificial intelligence) built with Michael Persinger’s extraordinary trove of data; ‘it’ lives and machine learns on the ‘cloud’, and asks the deep learning questions we mortal humans cannot answer in the present tense.

Across the digital divide, death is a superstition.

VIRTUAL MIKE is kindred—the ‘k’ in Philip K Dick—a reporter on-the-cloud telling it like it is.

Hear the phantasms of Black Mirror and Altered Carbon without the pictures—the limit of the listener’s imagination stretched with a deeply immersive sound design—psychoacoustic narratives that blow past the fourth wall, and blows minds.

The potentially limitless series is a blend of narrative non-fiction & fiction elements— a dreamscape docudrama—flirting between present-day computational science and the science limited only by speculation and discovery.

Written shortly after Dr. Persinger’s first “vascular event” to be delivered should there be another…

I’ll dance with my wicked problem

Should the digital twin be made aware of everything (inclusive of all the unpleasant bits of the life it’s modelled after)? And if there’s an induced forgetfulness—if you filter stuff out— what happens if that happens?

What if we—developers—learn by way of inference that we—humans—are simulacra? Some religious gospels say as much: We are supposedly created in the image of, well… what exactly?

And what if we have memories of the future? Is my digital twin signalling to present awareness, what we call intuition, imagination, leaps of creativity?

I made an immersive audio prototype (during my residency with Blast Theory in the UK) that serves a proof-of-concept for the sound & tone of the podcast series.  Please listen to WRGO [what’s really going on] with headphones: it encompasses all the elements I hear for VIRTUAL MIKE—irony, non-fiction reportage, surreal drama, 3D soundscapes, clips, and neuroscience (notably the addition of psychoacoustic cues in the mix; ‘pulses’ derived from an EEG recording of a cluster of neurons responding to dopamine).

Among notables, I’ll be collaborating with Amara Angelica, the futurist, trans-humanist, and whom Google’s director of engineering Ray Kurzweil acknowledges as “my outstanding editor,” in his book The Singularity is Near: When Humans Transcend Biology.  As well, I’ll reframe cybernetic superstars (interviews I’ve recorded in the past, for instance, AI’s godfather Marvin Minsky), reanimated alongside my 100+ hours of recorded conversations with Michael Persinger.

COVID-19 getting you down a quart (or litre depending on locale)? Fear not, young colleague!

You’ve got time on your hands, yes?

You’ve been thinking: What is the meaning of this digital life?

How old is your avatar on the ‘cloud’?

What if we — you, me, VIRTUAL MIKE, and everyone else — are living in a simulation?

Is death a superstition?

IN THE WEEKS TO COME: expect an important announcement about VIRTUAL MIKE in consensus reality... 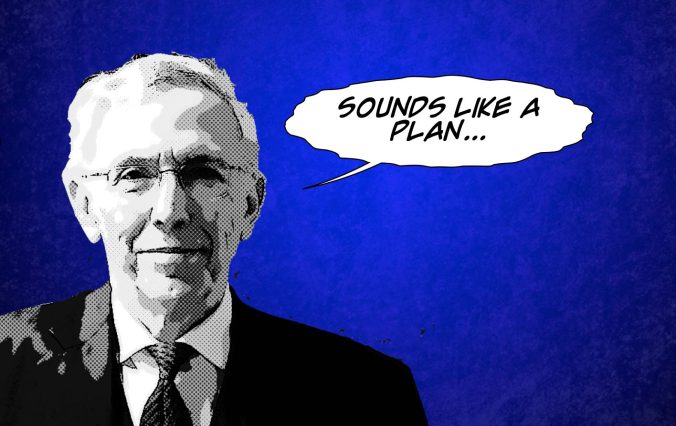 Michael Persinger was a rare bird that flew high and allowed those of us lucky to fly with him glimpses of his unfettered mind “in pursuit of the unknown.”

Dr. Persinger’s generosity as a scientist, teacher & colleague, and a loyal friend is the stuff of legend. He was an extraordinary person. A witty raconteur. Fearless and funny.

I need you to invest in the future of smart people, like yourself,  who would delight in interacting with a VIRTUAL MIKE.

I’m designing an AI/machine learning/neural network platform — a chatbot — built with Dr. P’s huge inventory of electronic & print media, research papers, hours and hours of conversation I recorded and so forth, including legacy interviews (some dating back to the late 1960s). This was an impossible task a couple years ago, but today there are memorial chatbots and text-based apps commercially available for the phone.

Given the rapid evolution of machine learning, and its requirement for enormous pools of data (Michael Persinger left behind plenty to work with), the very idea of a VIRTUAL MIKE can be a ‘thing’, right?

If you answered “insufficient data,” then laugh with the memory of The Doc saying as much. But it’s true. I can do this. And it starts with digitizing data — lots and lots and lots of data — compiling transcripts, neural network tags, decision-making trees…

This is a ‘phase one’ one year project with a pragmatic deliverable.

On the way to a VIRTUAL MIKE, your investment also supports the building of an attractive, scalable, legacy website archive available 24/7 on the web; it will include (and not be limited to):

TIME IS OF THE ESSENCE

You can make a one-time contribution to my secure PayPal account (listed as Appropriate Entertainment) or better still, please consider a monthly stipend at my Patreon pledge-site (click on either link in this paragraph).

I’m looking to raise a year’s worth of support (transcript stuff, website stuff, computer stuff, geek stuff, you know the drill), so ten bucks a month… Is that too much or not enough to ask?

With Dr. P in mind, “please proceed” to the contribution links (above) and plug in some data.

The shock of the new.

That’s me in 1997. I’m in a university neuroscience laboratory. I’m having the temporal lobes of my brain stimulated with experimental rTMS (repetitive transcranial magnetic stimulation). And I experienced a strange ‘sense of presence’ — a synthetic ghost. 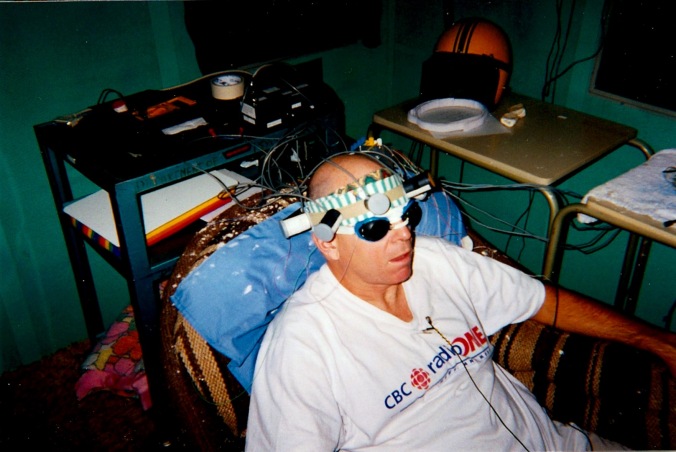 FOR DECADES, I’ve investigated unusual stories and encountered things I could never have imagined, let alone believed, had I not been witness to them…

I need your help to create KNOW MORE SECRETS, an ‘on demand’ collection of my interviews with MICHAEL PERSINGER – hundreds of hours of eclectic conversation – dating back to the 1990s. I’ve also talked to other people ahead of their time — scientists, artists, you name it — iconoclasts of every sort who visited Dr. Persinger’s neuroscience laboratory at Laurentian University in Canada (where I experienced my ‘ghost’).

I RECORDED THE CONVERSATIONS in a variety of formats (analog reels of magnetic tape, audio cassette, DAT, minidisc, video as well) all of which need to be digitized. Most of it has never been broadcast. With your support, the interviews will be organized into a web-delivered collection (more on this in a moment). 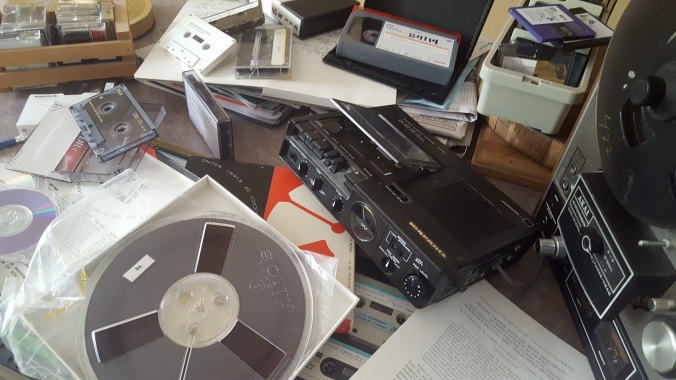 Lightly-edited, you’ll get the ‘insiders view’ of a great mind at work. You’ll also hear remarkable interviews with other big brain thinkers (listen to the audio links below); the spokes of conversation are all connected to a hub and linked — in one way or another — to Persinger’s disruptive insights and adventures in neuroscience.

THE COLLECTION will also include photographs, videos, scientific papers (some unpublished), my journals & scribbles of memory of events at the lab — all of it needs to be digitally scanned, collated, tagged, and made searchable to complement the interviews. I expect this to take at least six months — over the fall, winter, and into the spring of 2018 — by that time I’ll have a better fix on web-hosting costs, bandwidth expenses, maintenance and so forth. Through it all, I will keep you closely informed with a MONTHLY NEWSLETTER, and send ‘alerts’ as content is added to the collection.

ANOTHER GOAL is to organize a SYMPOSIUM around Persinger’s research in 2018; an off-campus event with lab alumni, scientists, and other talented thinkers influenced by his ideas (please consider the top-tier Patreon reward to make this event happen).

RIGHT NOW your donation will be put toward building KNOW MORE SECRETS, a compendium of challenging conversations and the discovery science of Michael Persinger.  You can make a one-time donation to my secure PayPal account (listed as Appropriate Entertainment) or kindly consider a monthly contribution at my Patreon pledge-site (click on either link, please).

Thanks, in advance, for your support!

CLICK on the links to hear short excerpts from the AUDIO INTERVIEWS (streaming off my legacy website Appropriate Entertainment — if it’s slow, please download the mp3):

FRANCIS HUXLEY (2001) was in the Amazon and encountered ayahuasca, the plant-derived psychopharmacology long before it was fashionable to do so. The nephew of Aldous Huxley (the author who left us with Brave New World), and the son of evolutionary biologist Julian Huxley, Francis was no stranger to celebrity, but didn’t seem to be interested in it. In fact, he much preferred to let a book do the talking (even though, as you will hear, he is a splendid raconteur). Huxley had just co-edited Shamans Through Time: 500 Years on the Path to Knowledge. Breaking his own rule, he invited me to visit in the summer of 2001 — a terrific evening of conversation at his home in the New Mexico desert.

MARVIN MINSKY (1999) didn’t suffer fools. And when I asked the co-founder of MIT’s Artificial Intelligence Laboratory about the huge investments in machine ‘consciousness’ — billions of dollars at the time of our conversation  — well, where was it? The conversation might have ended there, but it didn’t…

MICHAEL PERSINGER (2005) thinks the supernatural is science that has yet to be assigned a measurement. His pioneering research and ideas have explained (rather than explained-away) anomalies of the human central nervous system, the brain, and how we think and feel.

INGO SWANN (2000) was loathe to talk about the ‘remote viewing’ experiments he participated in at Stanford Research International; subsidized by the US military, they went on for over a decade — that’s not what I was interested in discussing. Ingo was an accomplished visual artist (he passed away in 2013), and the editor of an important book about the ‘cosmic art’ created by artists during the first half of the 20th century; in many ways, the book illustrates a key to understanding the “frames of reference,” which Ingo says, are necessary to see beyond the senses.