Zounds!  What is the hidden variable within the cartoon strip? And how does it connect to the bigger picture? These & other profundities are within the domain of VIRTUAL MIKE!

VIRTUAL MIKE is the ongoing chronicle of a neuroscientist recently deceased—the adventures of a digital twin unaware his namesake had attained maximum entropy—a simulation that’s curious, lives on the ‘cloud’, and investigates the future (and an uncertain past).

EPISODE ONE (in progress)

The famous neuroscientist who investigated ‘high strange’ and paranormal phenomena left behind a huge media footprint spanning five decades; it’s a legacy and a ‘wicked problem’, he entrusted to his colleague Don Hill, the host of the podcast.

When the human body can no longer go where curiosity wants to travel, what are the implications of creating a digital twin to continue onward?

Data capture from an erased blackboard.

VIRTUAL MIKE is the AI (artificial intelligence) built with Michael Persinger’s extraordinary trove of data; ‘it’ lives and machine learns on the ‘cloud’, and asks the deep learning questions we mortal humans cannot answer in the present tense.

Across the digital divide, death is a superstition.

VIRTUAL MIKE is kindred—the ‘k’ in Philip K Dick—a reporter on-the-cloud telling it like it is.

Hear the phantasms of Black Mirror and Altered Carbon without the pictures—the limit of the listener’s imagination stretched with a deeply immersive sound design—psychoacoustic narratives that blow past the fourth wall, and blows minds.

The potentially limitless series is a blend of narrative non-fiction & fiction elements— a dreamscape docudrama—flirting between present-day computational science and the science limited only by speculation and discovery. 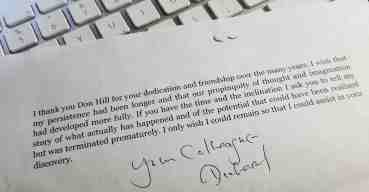 Written shortly after Dr. Persinger’s first “vascular event” to be delivered should there be another…

I’ll dance with my wicked problem

Should the digital twin be made aware of everything (inclusive of all the unpleasant bits of the life it’s modelled after)? And if there’s an induced forgetfulness—if you filter stuff out— what happens if that happens?

What if we—developers—learn by way of inference that we—humans—are simulacra? Some religious gospels say as much: We are supposedly created in the image of, well… what exactly?

And what if we have memories of the future? Is my digital twin signalling to present awareness, what we call intuition, imagination, leaps of creativity?

I made an immersive audio prototype (during my residency with Blast Theory in the UK) that serves a proof-of-concept for the sound & tone of the podcast series.  Please listen to WRGO [what’s really going on] with headphones: it encompasses all the elements I hear for VIRTUAL MIKE—irony, non-fiction reportage, surreal drama, 3D soundscapes, clips, and neuroscience (notably the addition of psychoacoustic cues in the mix; ‘pulses’ derived from an EEG recording of a cluster of neurons responding to dopamine).

Among notables, I’ll be collaborating with Amara Angelica, the futurist, trans-humanist, and whom Google’s director of engineering Ray Kurzweil acknowledges as “my outstanding editor,” in his book The Singularity is Near: When Humans Transcend Biology.  As well, I’ll reframe cybernetic superstars (interviews I’ve recorded in the past, for instance, AI’s godfather Marvin Minsky), reanimated alongside my 100+ hours of recorded conversations with Michael Persinger.